“If I could tell you anything, I would say, ‘Be daring. Let courage be the spine that makes you stand taller. Do not be afraid to stand taller. Be the woman or man you would want your daughter or son to follow footsteps after.’

If I could tell you anything, I would say, ‘Do the things that scare you. Let your dreams be big enough to scare you.’“

Grace upon grace. Provision upon provision.

While all of these things have been amazing, one of the most exciting things to come out of the last few months has been the launching of The Hesed Project. For years, two of my good friends (Nick and Rebecca) and I have spent the weekend after New Years praying, dreaming, and scheming of the discipleship/ adventure ministry we felt the Lord putting on our hearts. It was around their dining room table, over many (MANY) late night cups of coffee that this discipleship program focused on mentoring and counseling at-risk youth to their potential as gospel-centered, whole-hearted leaders first began to take shape. This October, all of those years of dreaming came to fruition as we officially launched Hesed!

I’m excited to announce that within our first two months we were able to bring Joanna, our first apprentice/ student mentor, on board! Joanna is working with me at the East Campus of the Denver Street School as our nursery worker. When she isn’t cuddling our littlest DSS student, Joanna is mentoring and discipling students who 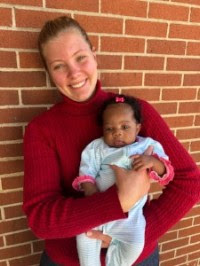 have professed faith in Christ and desire to grow in their relationship with Him. She is also helping me with every day prep work as we gear up to take our Street School students and Hesed Project team out to Port Alsworth.

As of today, we are 71% funded for the conference! Our students have been working their tushes off putting on spaghetti dinners, volleyball tournaments, and spending their precious weekends selling goodies at local markets; They only need to raise roughly $1,300 more to be finished fundraising! If you are interested in partnering with my students and pushing them to their goal during this last week of 2017, you can donate online here, or send a check to the address below. (This is a semi-shameless plea, as I would love to be able to shift our teams’ preparation emphasis from finances to digging into Hinds Feet on High Places and the rest of our conference curriculum when we return to school in January…)

Whether you are able to partner with my students financially or in continued prayer, I just want to say thank you. Jesus is doing mind blowing things in and through the Denver Street School and The Hesed Project and it is because of your partnership and prayers that I have the privilege of working in the “trenches” every day.

You all are a sweet gift in my life and I have been so reminded of that this advent season.