I knew the Lord had brought me to Alaska, but the end of first semester was a train wreck. (Or to be more “bush-correct”, you could say it was a proverbial plane crash.) By the time it was over, I was beyond burnt out. I was struggling with what I can now recognize as compassion fatigue and PTSD. I was spiritually overwhelmed, constantly feeling like I was losing the battle against the strongholds of addiction that raged in my house. By the time I’d realized just how far in over my head I was, it was too late. My little TLC plane had fallen out of the sky and was in flames around me.

I sat in our house with my face down on my kitchen table and my hands entangled in my hair, sobbing at one in the morning. Every few minutes I would catch a word or two from the serious conversation between my boss and one of my students in the other room.

I pulled my face up off the table and caught a glimpse of myself in the window. The woman staring back at me was gaunt; the way her black mascara had dripped over her sunken-in cheeks scared me. I stared in shock. Who is that woman in the window? That can’t possibly be what I look like. I tried to turn my head to examine myself from another angle but my muscles were so tense my neck wouldn’t turn. Instead I laid my forehead back on the table and ugly-cried until my stomach hurt. What are you doing Lord?

Eventually I ran out of tears and simply stared at the grain of the wood in my table. I couldn’t figure out where my “good” God was. I couldn’t bring myself to believe that He would ever lead me (or had actually led me) somewhere that felt so unsafe.

Lord, have mercy. Please. Where are you? I pleaded on repeat, as if those were the only words I knew. The first half of David’s Psalm 77 rang in my ears.

My boss eventually emerged from the other room. Lowering himself into the chair next to mine, he asked how I was doing. Unhealthy. Unsafe. They were the only words I could choke out, even though I knew they didn’t make sense as an answer to his question. I tried to focus on the logistics of what I needed to do with my student, but as his lips moved, my brain wandered. I’m ‘doing Your work’, Lord. You brought me here. You gave these girls to me, and me to these girls. Yet I feel like I’m dying. How could you let this happen?

It’s every missionary’s worst nightmare—that moment when the prayers for protection and safety, the ones that people back at home prayed over you before you left, seem to have worn off.

In that moment I was left to wrestle with the fact that because God is sovereign, that this was exactly where He wanted me. He knew this would happen. He knew I would feel unsafe. He knew it would be dark and I wouldn’t be able to sense His presence, but somehow I had to trust that He was still there…

He had called me to the depths of myself—my deepest fears and wounds—in His loving goodness, for His ultimate glory. I knew the theology, yet there I was, weeping, begging God to show up and replace my suffering with a feeling of safety, even though I’d always said I would do whatever it took for the people around me to know the love of Christ…

Around these parts, we pray for our pilots in church on Sunday and before almost every meal. To us they’re not just pilots—they’re family, my friends, my friends’ husbands, my bosses, my students, me.

I’ve learned a lot about trusting the sovereignty of God from hearing pilots and their loved ones pray. Our pilots all have their fair share of plane crash stories—some minor, some major, all mildly terrifying. Yet when they pray, they ask for wisdom as they fly, not for safety, even though many of them understand what it feels like to be in a plane that’s going down. 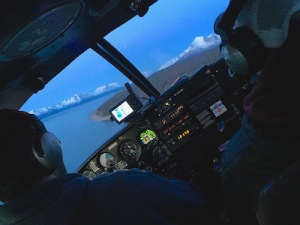 These men and women have been there; they’ve felt a complete lack of safety akin to what I felt in December.

They’ve all said, “Yes Lord, I want to follow you. I want to serve the people of Southwest Alaska by bringing them their groceries, the fuel they need to survive, and their loved ones, no matter the cost.” (After all, none of us could live and minister where we do if it wasn’t for our valiant bush pilots.) And thus, we cover our pilots in prayer, just as my church family in Colorado prayed for me as they sent me out as a missionary.

But even within that covering of prayer, many of them have walked away from a plane with it’s landing gear folded or it’s wings ripped off.

They know what it’s like to question God’s plan with every fiber of their being while simultaneously fighting to trust the theology and truth of His sovereignty. They’ve managed to praise God just moments after feeling the least safe they’ve felt in their lives. And they still wake up every morning and fly despite all of this because that’s what God’s called them to– even when it feels dangerous.

The prayers of our pilots have challenged me to stop praying for safety, and instead pray to be exactly where God wants me to be— even if it seems horrible and hard, maybe even traumatic at times.

What if we all prayed that way? For wisdom rather than safety, for His will rather than our own? It seems strangely reminiscent of The Lord’s Prayer if you ask me…

After all, Jesus never promised His disciples they wouldn’t suffer or be unsafe (Look at the life of Paul if you doubt me.) Similarly, the Lord never promised David that life, even life as a king, would be easy. (The beginning of Psalm 77 is pretty solid evidence that it wasn’t.) But God did promise He would be David’s refuge when the excrement hit the stone-age ventilation system… He never promised me that living in Alaska would feel safe, but through His word He has promised to be my refuge and physician when my proverbial plane crashes and I’m left climbing from the burning wreckage.

I woke up the morning after our proverbial plane crash, disheartened and dehydrated from crying every spare ounce of fluid out of my body. But being the stubborn woman I am, I was determined to salvage something (anything) from the wreckage. I threw my Bible and journal on the table I’d wept on just hours before, and got brutally honest with the Lord: “I don’t feel safe. I need to feel safe if You want me to stay here.”

Do you? Is safety the call I’ve put on your life, Kacy?

Etched below God’s rhetorical question in my journal are the words that I pray I’ll be able to live my life by, everyday–

Alright Lord, things might not “get better”. I’m coming to terms with that. It’s a very real possibility that You’ll continue to ask me to walk into (and live in) places that are hard and desolate, almost completely devoid of light, and call me to expose all of my pain so Your light might shine through this brokenness.

You might not deliver me from living in an unsafe environment, but I know this mess is a part of Your plan. And Abba, if You are going to use this hot mess to draw people in and glorify Yourself, then dammit, this is exactly where I want to be; safety or no safety…

“We are afflicted in every way, but not crushed; perplexed, but not driven to despair; persecuted, but not forsake; struck down, but not destroyed; always carrying in the body the death of Jesus, so that the life of Jesus may also be manifested in our bodies. For we who live are always being given over to death for Jesus’ sake, so that the life of Jesus also may be manifested in our mortal flesh. So death is at work in us, but life in You.”

2 Replies to “When the proverbial plane crashes”