I’m typically not big on New Year’s resolutions, or really the concept of “starting fresh” when the clock strikes midnight on December 31st/January 1st. Maybe I’m too cynical or too much of a realist, but the whole thing just seems silly to me, because deep down we all know that nothing resets when the clock chimes. I mean seriously people, we’re not Cinderella & this is not a Disney movie. (If my sister is reading this, I can guarantee that she is semi-frowning right now… Sorry Cam.)

Anyway, several years ago I went out to lunch with two of the wonderful women that I have the privilege of working with at the Street School. Both of them are older than me; one is in her late 50’s with children around my age and the other is in her early 40’s with kiddos in elementary school and junior high. As I sat and listened to them talk, Carey (the one with the younger kids) mentioned that she had a word for the year, and at that point her word was “war” because of all of the battles she felt like she was going through to come out a better mother, wife, and woman of God. (P.S. She’s also a phenomenal author, blogger, and life coach. Check her out here!)

That afternoon I sat in our booth at Chili’s, listening to the conversation and I got to thinking: If I had a word for each year, what would it be?

At the time, it was near the end of 2011, which was by far one of the roughest years of my life. Henceforth my word for the remainder of that year became “survival”.

Looking back on the last three years, I can see exactly where those words came into play in my life and shaped me into the woman I am today. When the clock struck midnight and drew 2011 to a close, my sister and I both looked at each other and burst into tears, gasping, “I survived. We survived. I never thought it would be over, but it is.” Slowly, 2012 brought rebirth into my life through my move back to the city, truly reconnecting with God, and establishing myself within two healthy, growing Christian communities. In 2013, God pushed me to my limits spiritually, personally, and professionally, and from that came growth that I never would have fathomed last January.

So this week, as I sat and prayed about what my word was on New Year’s Eve, I instantly knew that 2014 was going to necessitate a phrase instead of a single word: Turn the other cheek.

By no means would I consider myself an outright angry or hostile person anymore (Thanks for fixing that one Jesus). However, when my personal and familial life went to crap at the beginning of Christmas vacation, I realized that I suck at turning the other cheek. When I am verbally attacked and pushed and put down and then attacked some more, I start off calm and collected, ready to turn the other cheek, but eventually I snap and attack back… and it’s bad. I’m quick with my speech and if I don’t intentionally use my powers for “good instead of evil”, well, things get REALLY messy REALLY quickly. Maybe this is a byproduct of the culture I was raised in, or maybe it’s just human nature, but either way I have realized that harsh words in response to harsh actions are unfruitful.

38 “You have heard that it was said, ‘An eye for an eye and a tooth for a tooth.’ 39 But I say to you, Do not resist the one who is evil. But if anyone slaps you on the right cheek, turn to him the other also. 40 And if anyone would sue you and take your tunic, let him have your cloak as well. 41 And if anyone forces you to go one mile, go with him two miles. 42 Give to the one who begs from you, and do not refuse the one who would borrow from you.

This year I am going to learn to hold my tongue, smile, and let God do me fighting for me. Even if it kills me, I will be nicer to those who persecute me and cut me down. I will love people; I’m not giving myself an alternative. It’s not going to be easy, but I know that it has to be done in order to save my floundering relationships and rebuild ones that have completely fallen apart.

Where is God working on your heart? What will your word be for 2014?

19 Know this, my beloved brothers: let every person be quick to hear, slow to speak, slow to anger; 20 for the anger of man does not produce the righteousness of God.” (James 1:19-20) 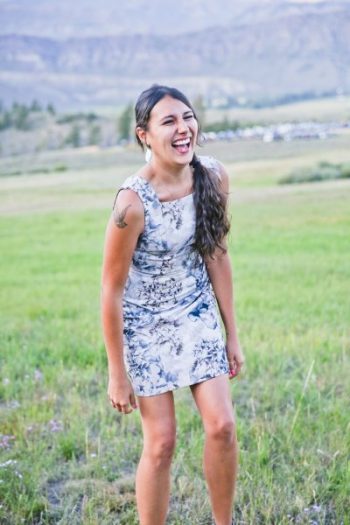 “The night is dark but I am not forsaken
January, you’ve been pretty moody and blue. Today’s afternoon walk was perfectly on brand in the best possible ways. 💙
One of many couches full of cousins that took place this month. 💕 So grateful to be so thoroughly loved—near and far throughout this season.
Throwback to celebrating @kit_rob_lees’ 33rd birthday a few weeks ago in Denver and partying like it was 2017— obviously with a Snooze brunch. 🧡🍾🥞#LongLiveTheYarrow
“Blessed is she who believed that there would be a fulfillment of what had been spoken to her by the Lord.” ~ Luke 1:45 || I’ve been thinking a lot about this verse and the concept of walking through our worst fears and deepest insecurities with Jesus following lunch with @rebeccalbeckner last week. I don’t have any revelatory insights to share— just tears, long walks (and flights) with sweet friends, a God who is big enough for all of my emotion and conflicting thoughts, and an appointment with a counselor later this week. The middle is messy, my friends. But the views while this messy story unfolds in the Alaskan bush with the Creator King certainly aren’t terrible… #lifetheAKedition
Grateful for our time with so many loved ones, and so dang grateful to be heading back to the village today. Until next time, Colorado 💕
My heart is simply overflowing after a boujee mountain lunch with these sweet besties of mine and their cutie newest edition. Even though time is always too short and we simply live too far apart, I love knowing that there are other insane “pioneers” out there living large and loving hard. Love you forever @rebeccalbeckner & @nickbeckner. 🧡#adventuringinbenevolentaffection
Familia, baile, y tamales: ¿Que más se puede pedir en un Sábado? 🫔💃🏽
Gemelas Leybas de por vida 🧡👯‍♀️