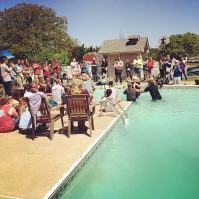 (Disclaimer: This picture will make way more sense to you by the time you finish reading these ramblings. Don’t try to figure it out now. You might hurt your brain.)

As I write this my butt is in a car driving home from Nomads, a mind blowingly good missions conference in Oklahoma. (Don’t worry, I’m in the passenger seat. Nicole is currently driving.)

What an absolutely wild weekend it has been and what a wild week I have ahead of me. But before I get into that, I have a short story related to what is on my heart right now.

Once upon a time in a magical land called Aurora, there was a tall Mexican girl who owned a leather sofa. (Okay, it’s me. Go figure. Moving on.) Around the same time, I had a tiny apartment in which the white leather sofa / pull out couch lived. Every night in said teensy apartment, I would make dinner, tuck my god kids into my fluffy queen sized bed, and go sit on my white leather sofa with my then-boyfriend and study while he watched television.

Life was simple, but it was good.

Over time, that tiny apartment in the ‘hood became home. We got a puppy and nice dishes, painted the walls and bought random kitchen appliances. (You know, “American adult stuff”.)

Mr. Wrong and I enjoyed couple-y events and late night dinners with our neighbors. We took the puppy for walks around the lake near our house and sat on our patio and talked into all hours of the night.

In my own limited perspective, my life was everything I had ever wanted.

Aaaaaand then it all went to H-E-double-hockey-sticks for a little while.

By the time my lease renewal came up the following May, life had changed.

I had lost custody of my god kids and had returned to sleeping in my own bed instead of on the sofa bed.

Mr. Wrong and I broke up for the first (but unfortunately not the last) time.

I decided not to renew my lease and instead to move in with a friend in Denver. And when moving day rolled around, for some reason we legitimately could NOT get that stupid white leather sofa out of my apartment.

Seriously! For three hours I sat back and watched my dad and brothers hem and haw, push and pull, position, reposition, and then try to smush the sofa through the doorway that my friend and I had slid it through (without any hassle) a year earlier.

By the end of that day, my walls had holes in them from my beloved family trying to cram the sofa through a hole that it clearly was not fitting through and I had experienced at least two emotional freakouts from my siblings and dad.

Eventually, out of my own emotional exhaustion, I went into my tool box, grabbed my hammer, and began beating the sofa to pieces, ripping the leather while simultaneously cracking the wooden beams that held its frame together. After about twenty minutes of manic hammering, slightly terrified stares, and nervous laughs from my brothers, the sofa was in pieces, ready to be carried out to the dumpster.

Not quite my classiest moment…

Looking back on that today, I simply sit here and laugh to myself. Not only because I went absolutely bananas on a poor, undeserving inanimate object, but because my life today is so drastically different.

Clearly, I no longer own the leather sofa. I still have most of my nice kitchen appliances, dishes, and linens, but they have been shoved into a ten by five foot storage unit, awaiting my grand adventure to the South. (Which, side note: I drove through Texas on my way to Oklahoma and oh MAN. Pray for me. It is the WORST.

Anyway. Mr. Wrong is out of my life, despite his attempt to wiggle his way back in last week, and my dog is currently living on my mom’s ranch up north.

Oh, and me? When I get “home” to Denver tonight, I am packing up my guitar and the three boxes of my belongings that remain in my tiny apartment, and for all intents and purposes, I’m voluntarily becoming homeless.

Essentially, I am living the opposite life as I was four years ago. Back then I was a young woman playing the part of a surrogate “mom” to two little ones, with an apartment, a schedule, bedtimes, nice furniture, and a waffle maker.

Aaaaaand the intensity of not living a life like that anymore hit me today like a train.

As I was sitting in the grass before Nomads worship this morning, making a mental check list of things that I needed to do to get us back to Colorado in one piece, I was overwhelmed by a feeling of grief.

I have no home.

I have no solid plan for the next seven months.

What am I doing?!

And that’s when I heard it. Literally. It wasn’t some booming voice from heaven. Nope, it was the voice of Bono. Actually, a video of Bono that had begun to play on the screen in front of me while I had been obliviously stressing out.

“This is not a burden. This is an adventure.” Bono said, addressing the crowd of world changers & missionaries in the video.

And there, in my petite pity party on the grass in Oklahoma, I remembered why I’m doing all of this.

Jesus has a plan. God knows the grief in my heart and is going to provide in ways that I can’t predict or even try to comprehend.

After the video of Bono had ended and I had managed to pull my slightly emotional self together, Jamie Zumwalt, one of the women that God used to call me into international missions work this time last year, stood up and announced that they would be moving the crowd over to a swimming pool on the other side of the property where they would be baptizing anyone who wanted to devote or redevote their life to following Christ.

I had already been baptized once when I became a believer, and because I was not expecting the urge to go anywhere near a body of water this weekend, I didn’t pack a bathing suit. But ten minutes later, with all of my clothes on, I hopped into a swimming pool and was re-baptized (I’ve decided that’s a thing.) by one of the most formative women in my missions journey thus far.

Today, I chose Jesus. I chose not only to follow Him in my heart and mind like I did when I was first baptized, but with my whole life. Today I needed to make a statement (more for myself than anyone else) that I am dying to my desires– my dreams of white leather sofas, waffle makers, and stability. I am following my Savior where ever He leads me.

So here I sit, in a car somewhere in Kansas with soggy clothes on, the windows down, and worship music blasting on my way back to the great state of Colorado.

As of today, I have nothing figured out. I have a vague idea of where I will be staying for the next few months but I know that God has called me into a season of adventure and obedience. I will go wherever He calls me, whenever He calls me there, and it will be beautiful.

My name is Kacy and I am becoming a nomad for Jesus.

As they were going along the road, someone said to Him, “I will follow you wherever you go.” And Jesus said to him, “Foxes have holes and birds of the air have nests, but the Son of Man has nowhere to lay his head.” To another He said, “Follow me.” But the man said, “Lord, let me first go and bury my father.” And Jesus said to him, “Leave the dead to bury their own dead. But as for you, go and proclaim the Kingdom of God.” Yet another said, “I will follow you, Lord, but let me first say farewell to those at my home.” Jesus said to him, “No one who puts his hand to the plow and looks back is fit for the Kingdom of God.”
(Luke 9:57-62)

There was an error retrieving images from Instagram. An attempt will be remade in a few minutes.